Colorado Springs, Colorado -- Two-time World Teamer and Minnesota Training Center athlete Jordan Holm wanted to wrestle a week earlier. So when Holm was finally able to compete, he did so in dominating fashion.

On Thursday at the U.S. Olympic Olympic Training Center in Colorado Springs, Colorado, Holm won his third straight Dave Schultz Memorial International with a 6-0 victory over Jon Anderson of the U.S. Army at 85kg. As a team, the Storm finished second behind team champion Kazakhstan.

“Dave Schultz is a tough tournament,” Holm said following the tournament in an interview with USA Wrestling’s Gary Abbott. “I am really proud of the fact that I have done real well here. I got dinged up in practice and couldn’t go in the Pinto Cup. My coach told me it was my call today if I wanted to go. That made it my decision which meant I couldn’t say no. It turned out well.”

Holm’s championship was the top finish of the six Storm wrestlers who placed in the top four of the tournament. World Teamer Joe Rau finished second at 80kg. Brian Graham wouldn’t place due to injury, but one of his consolation victories was over 2008 Olympic champion Islam-Beka Albiev of Russia.

Holm opened with a tight 3-3 criteria victory over Nursultan Tursynov of Kazakstan in the quarterfinals. Holm held the criteria courtesy of a two-point takedown in the first period. Holm would not give up a point the rest of the way, teching Khymba Johnson of Northern Michigan 8-0 in the semfinals and then topping Anderson in the finals.

Rau fell to 2012 Olympian Ben Provisor 2-1 in the finals. Rau defeated Provisor to make the 2014 World Team. Rau opened up with a quarterfinal victory over Argentina’s Maximilian Prudenzano 8-4 before topping 2012 Olympian Askhat Dilmukhamedov of Kazakhstan 11-5. 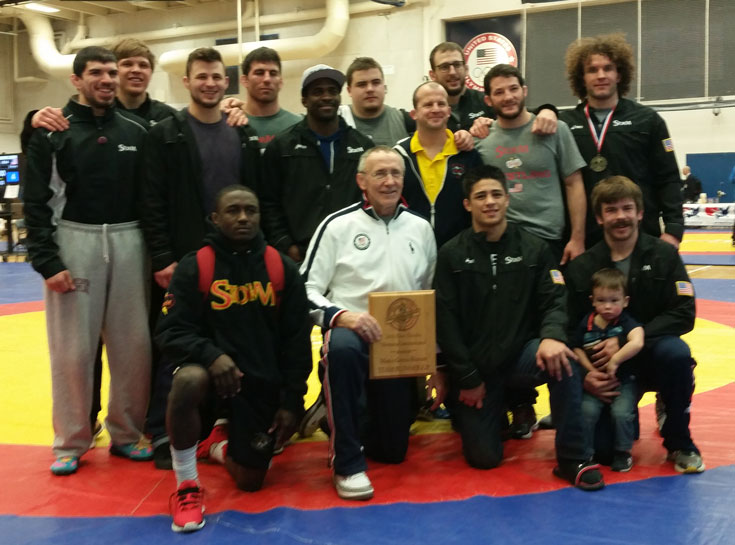 In his first tournament following a bronze medal at the 2014 World Championships, Andy Bisek finished third at 75kg. Bisek competed in the finale of the Jack Pinto Cup last weekend, but this was his first official UWW-sanctioned event of the year. He opened with a 10-1 technical fall over Naoki Hanayama, the same opponent he beat a week ago, then fell in the quarters to Kazakhstan’s Maxat Yerezhepov 5-2. Bisek would then win four straight matches, culminating in a 6-2 victory over Geordan Speiller of the Florida Jets.

Alec Ortiz had a strong third-place finish at 71kg. The Oregon native and University of Minnesota graduate teched Chris Gonzales of the USOEC 12-2 in the opener, then topped Anthonie Linares 8-6 in the quarterfinals. He fell to upstart Michael Hooker of the U.S. Army, the eventual champion, 9-4. He would beat Gonzalez for a second time in the consolation semifinals before dispatching Keita Yuda of Japan 14-4.

Ryan Mango finished fourth at 59kg. Mango opened with two strong wins, a 9-0 tech over Mexico’s Ali Soto Macia and then pinned veteran Jermaine Hodge of the Army in 51 seconds before losing 9-0 to 2013 world champion Ivo Angelov of Bulgaria. Mango would then top the Army’s Max Nowry 8-1 before falling 9-0 to Kazakhstan’s Mirambek Aingulov.

Also finishing fourth was Dr. John Wechter at 98kg. Wechter fell 2-1 in the quarterfinals to Yerulan Iskakov of Kazakhstan, then rallied to win three straight bouts to reach the bronze-medal bout. He dropped another close 2-1 decision to miss out on third place.

Graham, as noted above, was forced to default out of the tournament in the consolation semifinals due to injury against Japan’s Shogo Uozumi, who he defeated a week earlier at the Pinto Cup. One round prior, Graham scored two points with six second remaining to beat Albiev 7-6.

Fans can follow the freestyle action and get full Greco-Roman Results at http://www.trackwrestling.com/opentournaments/VerifyPassword.jsp?tournamentId=1735076

The tournament is also being streamed live by Flowrestling as part of the FloPro subscription service.