After finishing with a bronze medal at the 2014 World Championships, Andy Bisek was set to sit out the U.S. Open and work his way automatically into the best-of-three series for the U.S. World Team Trials.

Bisek finished the first match off in a shade under a minute with an 11-0 victory over upstart Dillon Cowan to technically win the U.S. Open at 75kg and start off the series with 1-0 lead as it shifts to Ithaca, N.Y., June 4.

The finals of the U.S. Open served as the first of the best-of-three, but in Bisek and Spenser Mango's case, they got to sit out due to their top-five finish at the preceding World Championships.

"I feel like I haven't had a real successful block of training. I've had some injuries. Mentally, it's helped me improve by physically I haven't been able to put in as much work," said Bisek, who won his second straight U.S. Open. Once Bisek got on top in par terre, he ended things quickly. "If I get on top, I have to finish the match," he said. "That's what I did. That's what I'm training for."

After winning the 85kg Greco-Roman title on Friday, Jordan Holm was named the Greco-Roman Outstanding Wrestler.

Six of the eight Storm wrestlers competing in Greco-Roman on Saturday placed in the tournament. 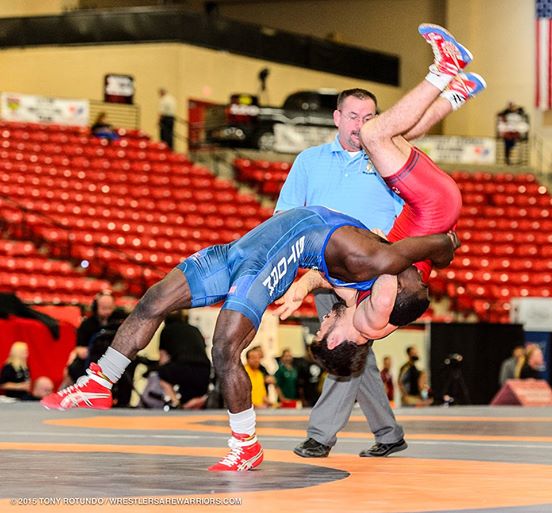 Ryan Mango finished fourth at 59kg. He fell 8-4 in the semifinals to Jesse Thielke of the NYAC and rebounded to defeat Max Nowry of the Army 8-0 to reach the bronze medal match. Mango fell to Nikko Triggas in a highly-entertaining 13-10 match.

At 75kg, Jake Fisher finished second in the challenge tournament, falling to Cowan by fall at 1:11 in the challenge final. Fisher had won three straight prior to the loss, including two techs and a fall. High schooler Mason Manville finished eighth at 75kg.

At 80kg, returning World Teamer Joe Rau was upended by eventual champion Patrick Martinez 2-2 in the semifinals and finished in fourth place. Rau was beaten by past World Teamer Cheney Height for third place 8-0.

On the freestyle side of things, Dustin Schlatter finished second at 70kg, falling in a controversial 4-2 match to Nick Marable of the Sunkist Kids. Marable's four-point score early in the bout was cause for some dissension amongst the Storm coaches, who felt the score should have been credited to Schlatter.

Schlatter lead a crew of four individual Storm placers, including Kevin LeValley's fourth-place finish at the same weight. LeValley, who lost to Schlatter in Friday's semifinals, topped Titan Mercury's Derek St. John in the consolation semifinals before falling to another Titan Mercury wrestler, James Green, who recently completed his career at Nebraska.

In only his second competition in five years, Jayson Ness finished seventh at 65kg. After falling to runner-up Jordan Oliver on Friday, Ness moved into the consolation rounds by beating Brett Robbins of the Panther Wrestling Club. Ness was knocked into the seventh-place match due to a 10-0 loss to four-time NCAA champion Logan Stieber of Titan Mercury. Ness beat Sunkist Kids' Robbie Mathers 10-0 for seventh.

Tony Nelson ended his tournament in eighth place. Nelson opened up the second day with a win over Matthew Meuleners of Titan Mercury, but he was then topped by Chad Hanke of Titan Mercury 4-4 on criteria. Nelson would injury default in the seventh-place match.