The 2018 US Marine Corps Junior and Cadet National tournament kicked off over the weekend, representing for most high school aged athletes the culmination of the 2018 season. The event draws close to 5,000 unique entrants from across the country all in search of bringing home a coveted “stop sign;” a representation that the individual has earned a place on the podium and became an age group All-American.

This age group tournament also serves as a stepping stone for future Olympic hopefuls, most members of the Minnesota Storm Senior Roster competed in the tournament at some point in their career. For some the tournament was their first opportunity to test their skills on the national stage, for some it’s where they realized that the Olympic dream could be attained.

Below we’ll take a look back at how some of our senior competitors faired during their time in Fargo: 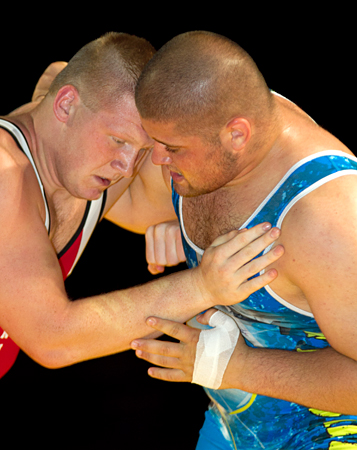 Let’s start with the gentle giant, Donny Longendyke. By the time Donny graduated from high school he was heralded as the top (at a minimum one of the top) heavyweight prospects in the country. Donny first catapulted into the national spotlight following a dual All-American finish at Cadet Nationals back in 2009, which included a 1st place finish in the freestyle competition. In 2010 Donny continued his success despite making the move up to the Junior age group where he placed in both styles, including a finals appearance on the Greco side.

Hayden Zillmer is another Minnesota Storm wrestler who found success on the national stage, though he was only about half the size. As a Cadet back in 2007 and 2008 Hayden brought home national titles in both styles, competing at 88 and 91 lbs. Significantly lower than the 203 lb. weight class he competes at today. Following a transition into the Junior age group Hayden was able to replicate his success with a 6th place finish in 2010 and a 3rd place finish in 2011, both in Greco. Our next senior athlete on our list compiled 7 All-American finishes in 4 trips to Fargo, accumulating a combined record of 76-8. These 7 All-American finishes included 4 national titles, those coming in 2007 (Greco), 2008 (Freestyle & Greco), 2010, Greco. The individual who accomplished these feats is no other than Dylan Ness. One of the most accomplished Minnesota wrestlers to compete in Fargo, Dylan definitely set the bar for things to come.

The final athlete we’re going to highlight today is Zach Sanders. From 2003 to 2007 Zach made 5 trips to Fargo, wrestled in 93 individual matches, and claimed 10 All-American finishes. Zach won 2 national titles in freestyle (2004 and 2006) and 1 in Greco as a Cadet (2004). Zach compiled a record of 79-14 overall. 44-4 in freestyle, the style he competes at internationally today. There wasn’t a single tournament in Fargo that Zach entered where he didn’t finish as an All-American.